When I got the first two Elden FF’s from South Carolina, the following documents were part of the files that came with the car.  They maybe of interest to others as it was to me.

First are two ads published in the SCCA “SportsCar” magazine, of July 1989.  On the top was an ad for Elden Racing Cars for their new PH 27 Formula Ford.  Also in the same edition of “SportsCar”was an ad for the Elden Register, USA;  a publication put together by Paul Pfanner and Steve Nickless. 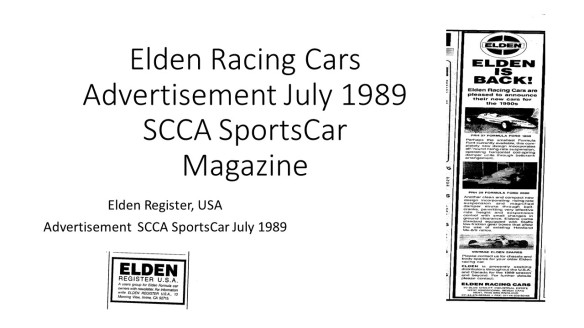 Secondly, is Issue 1 March 1989 of  “the elden register, u.s.a” published by Paul Pfanner and Steve Nickless for “American Elden Owners and others interested in the marque.”

Inside this issue of the “elden register, u.s.a.” was an reprint of a “Sales Brochure from the EldenPH-8, Published by Tom Pumpelly’s NTW Racers Store in 1972”.  This contains allot of information on the original specifications of the PH-8 as it was imported to the USA.

This is very good reading and is located here ensure Elden history is maintained.  If someone has other docs we want to maintain, please send them to me and I will add them.