June of this year year we entered the Falconer bodied Elden FF, AM74-5, in the SVRA Open Wheel World Challenge at the famed Indianapolis 500 Road Course.  I heard there were 350 open wheel cars entered and by looking at the drivers meeting in the media center I would believe it.  There were FV’s to F1 cars.  Pro series and amateur entrants.  I met a few folks driving F Jr’s from Australia and New Zealand.  Cool! 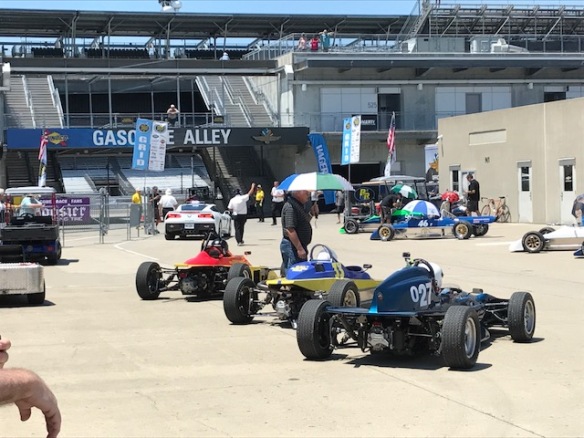 We came well prepared and had minimal problems with the car.  But when we left NM we knew that the under-steer in the car was still to be worked out.  We are running 300 lb/in springs front and rear.  We have been advised to go to 275 Fronts and 250 or softer in the rear. Upon getting home we will order those springs and see if it helps.  Note for History, Elden #4 AM73-74 springs were 225# front and 180# rears.  They appear to be original.  So during the races I fought some under-steer in the high speed corners.  So I took my time to ensure not to interfere with anyone of the faster guys.

Also I guessed at the gears and 4th was okay but 1-3 were to low and was unable to use effectively, so left allot of time on the table.  I was so consumed on trying to drive, I decided not to chase gears.  But I have a better idea from other competitors what should be in the Hewland for next time.

So here is a video of the last race.

Next race is High Plains Raceway end of July.