Well it has been a busy few weeks and not all on the Elden’s.  But to catch up:

Received aluminum pipes made by HamFab Inc in Edgewood NM.  These are replacing the numerous rubber hoses and connectors that convert 1 1/4″ pipe to 1 1/2″ radiator plumbing.  Doing this required modifying the header/collector tank.  I am still not happy with the way this came out so look for more work on this topic.

Since the radiator plumbing has hit an interim step I wanted to start the engine to do leak down/compression tests, etc.  Well that didn’t go so well.  I thought I had solved the oil prime problem. When starting the engine for the first time in 16 years, rotating the engine over with the starter and plugs out to build oil pressure, was very slow.  Many minutes of cranking before we had oil pressure.  Found some air leaks in the suction side plumbing from the oil pan to the 5 port pump.  This did not correct the problem as I had though/wished. Could not get a good prime and once the pressure bled off then couldn’t get it back.

So we pulled the engine and transaxle to remove the Cosworth 5 port pump.  Disassembled the pump and found some scoring on the suction rotors.  Talked with Curtis Farley at Farley engines an I believe the problems are as follows: 1) pump maybe a bit weak with rotor scoring and maybe some wear on the rotors.  Sent to Farley Engines for a rebuild.  2) this engine had 1/2″ID oil suction lines want 5/8″ at a minimum.  3) the oil line from the bottom of the oil tank to the pump was originally routed up and over the pump instead taking a low route up to the pump. This doesn’t allow an oil “head” to be seen by the pump and if there is pressure and the engine shuts off an air bubble would likely form creating a problem again.  Solution to re-route all lines to ensure the pump see’s the oil level in the oil tank and increase to a min of 5/8″ oil line. 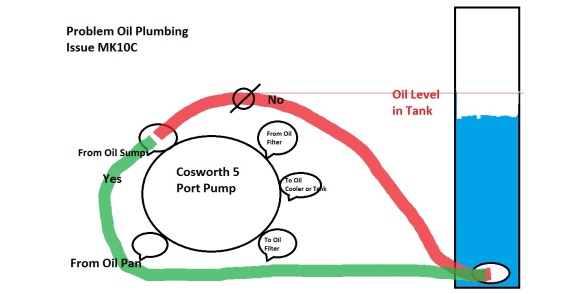 So while I wait for the oil pump to be rebuilt, I will return to the re-plumbing and back to the battery box cover.

First vintage race will be Deming NM, March 30 April 1st.  Need to get the non-vintage (we are welcome to run in our own group)1987 Van Diemen Formula Continental ready.  So back to the shop.

This site uses Akismet to reduce spam. Learn how your comment data is processed.